The Hard Realities of Rescue

We hear amazing stories of love and respect for the goats that come to our rescue – people who have to surrender beloved companions for economic or health reasons, or because a herd member has passed and a goat is alone. We also see terrible cases of animal neglect, abuse, and mistreatment.

Sometimes animal rescue work is heartbreaking. And while we try our best to not cover the gruesome details on our Facebook page or our publications, we do have a few special stories we’d like to share about some amazing goats that survived against all odds.

We love these goats dearly. They have gone through more than can be imagined, and came through it still loving and trusting the people who care for them. We hope their stories inspire you as much as they make us work harder every day to be kinder, more compassionate human beings.

On February 2, 2017, two goats were mauled by their family’s three Golden Retrievers. One of the goats died in the attack. The other was severely injured, but the family didn’t want to pay for vet care, so they surrendered the goat to animal control. The family did not receiving a citing or any fine.

New Moon Farm took in the goat, named Mick,  on February 4th. In the two days he spent in animal control’s care, he didn’t receive any veterinary care. Despite having what we discovered to be 27 separate bite wounds, he was not giving any pain medication or antibiotics.

Dedicated New Moon Farm supporters Shelby and Gary picked Mick up from animal control and drove the two hours it took to get him to our farm. Within hours of his arrival we were at our veterinary clinic, where our amazing veterinarian, Dr. Krystal Grant, came after opening hours to clean and evaluate his wounds.

In addition to the multiple puncture wounds, his hind legs had been shredded. The skin and muscle was torn away, and the tendons and bones of both hind legs were damaged and exposed. We started him immediately on strong antibiotics and pain medications, cleaned and bandaged his wounds, and brought him home to the rescue.

All through this painful experience, Mick never fought us. Though we knew his injuries were severe, we had to give this brave little boy a chance.

Mick moved into the bathtub at Ellen, our founder and farm manager’s house. The bathtub was warm, clean, dry, and confining. Every day we unwrapped, cleaned, medicated, and rebandaged his legs. We brought him fresh blackberry leaves (his favorite), baby carrots, blueberries, and anything else he wanted. The cats hung out in the bathroom and kept him company.

The puncture wounds healed, and as we feared, the extremely damaged skin on his legs sloughed off. He now had completely exposed bones and tensons. We stepped up the bandage changes to twice a day. But despite our best efforts, on February 19, both of Mick’s Achilles tendons ruptured.

The Achielles tendons in a goat are higher up than on human beings, and they support the hock joint. Without support, his legs simply folded in half; there was nothing supporting his legs at all. Dr Grant fitted him with splints, which held his legs totally straight. Within minutes of being set down with his splints, he began to walk around as if it was totally normal.

For weeks we did daily splint/bandage changes. Dr. Grant made custom casts for him. The casts caused pain, however, so we ordered him a set of custom braces that fit over his bandaged legs. The braces arrived March 30 and were fitted by Dr. Jeff Mayo, an orthopedic surgeon. Mick wore the braces for a few months, but ultimately, they couldn’t hold up to a goat’s life. Plus, they weren’t as rigid as casts and the x-rays showed his joints were not fusing. But Mick was still happy, social, and content. Despite months of treatment, Mick’s attitude never soured. He was always a good patient, and seemed to truly understand we were trying to help him. If he wasn’t willing to give up, neither we we.

The only option left was to operate. On June 30, 2017, Dr. Mayo performed surgery to attach metal plates to Mick’s legs. The plates ran from several inches above the hock to several inches below, and were held in place with screws. The goal was to get his leg bones to fuse.

Once again we did daily bandage changes and gave him antibiotics to ensure the wounds didn’t become infected. Mick had the plates for eight months, during which time the skin over the plates never fully healed. And he never complained. After a year of splints, casts, hardware, bandage changes, and boots, the finish line was finally in sight for our Mick. On April. 11, 2018, Dr. Grant and Dr. Mayo removed the metal plates and screws from his legs.

Mick was put back into splints to support the newly fused joints. We knew he needed a few weeks for the bone to fill in and for his body to adapt to his “new” legs. After over a year of artifical support of one kind or another, Mick had little muscle mass in his hips and legs. We started physical therapy. Once he seemed comfortable walking, we removed the rigid splints and went to a soft support bandage.

Throughout this whole experience, our goal has been to allow Mick to live as normal a goat life as possible. Boots that cover his bandages allow him to live with the sanctuary herd, and he has bonded with some of our other “special needs” friends. Since the removal of the plates, Mick has been in and out of various kinds of external support. He’s still very tentative about bearing weight on his hind legs, but is getting more active. As he gains confidence and his strength returns, he is getting braver.

We hope that by the end of 2018, Mick’s ordeal will finally be over. Though he will likely need some kind of support braces for life, we know he’s okay with that. And we’re willing to do whatever it takes to ensure his quality of life. Thank you, from all of us at New Moon Farm, to the whole staff at Arlington Veterinary Clinic for their patience, love, and dedication to help this little guy. And to all of you who have donated to support his care, we couldn’t have saved him without you.

Mick is a permanent member of the New Moon Farm sanctuary. Your sponsorship of Mick will help us care for this special boy for the rest of his life! 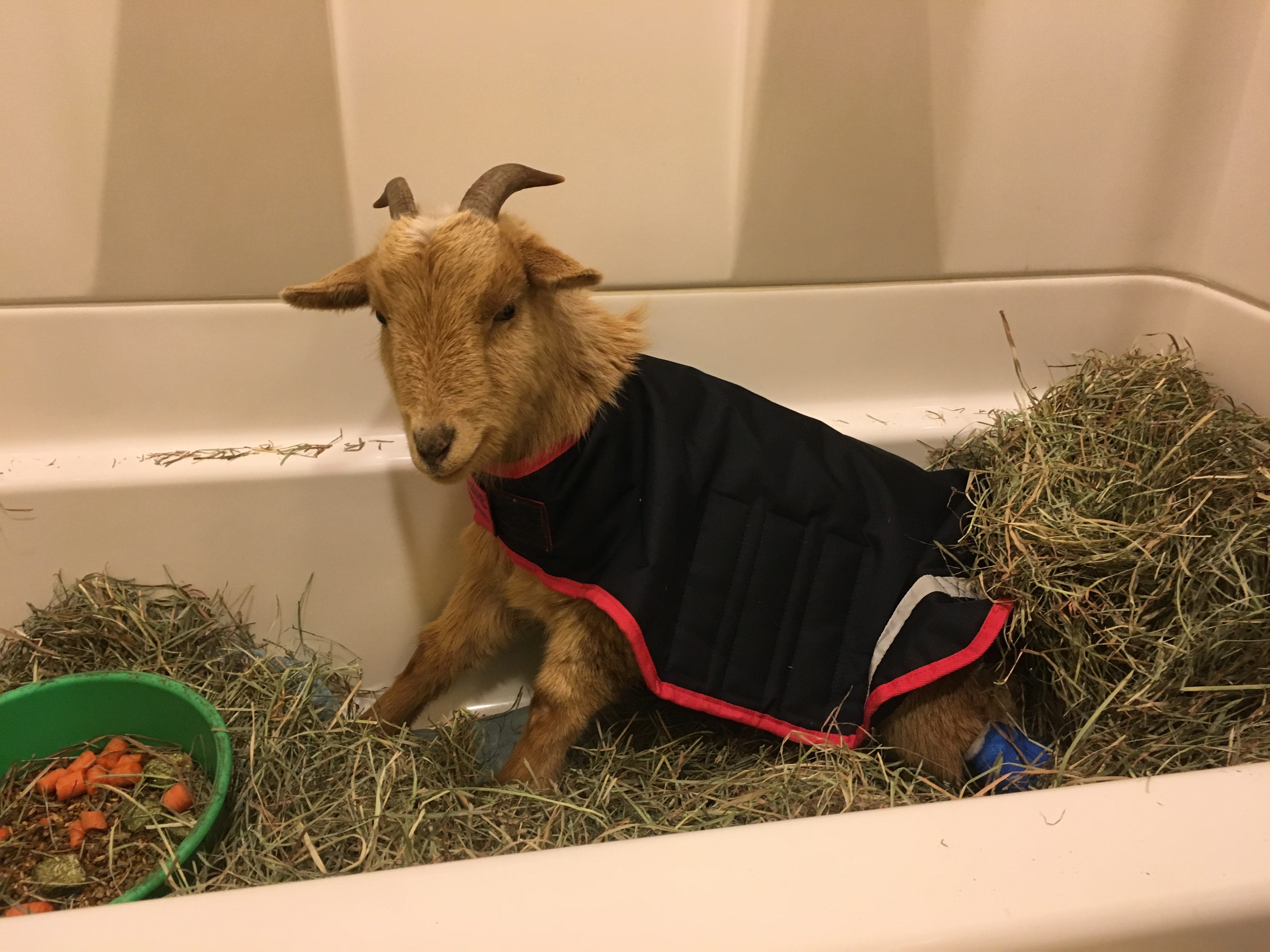 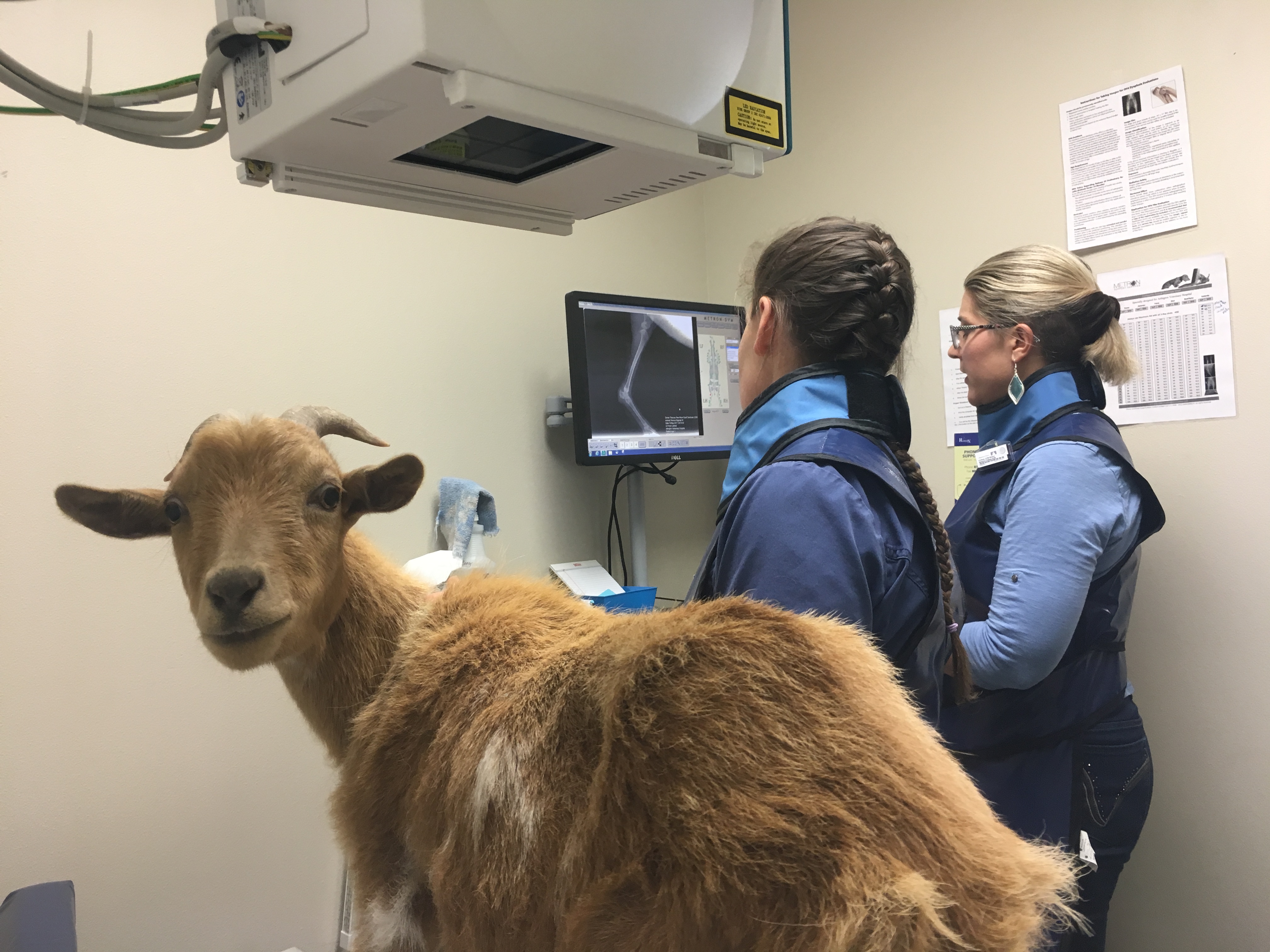 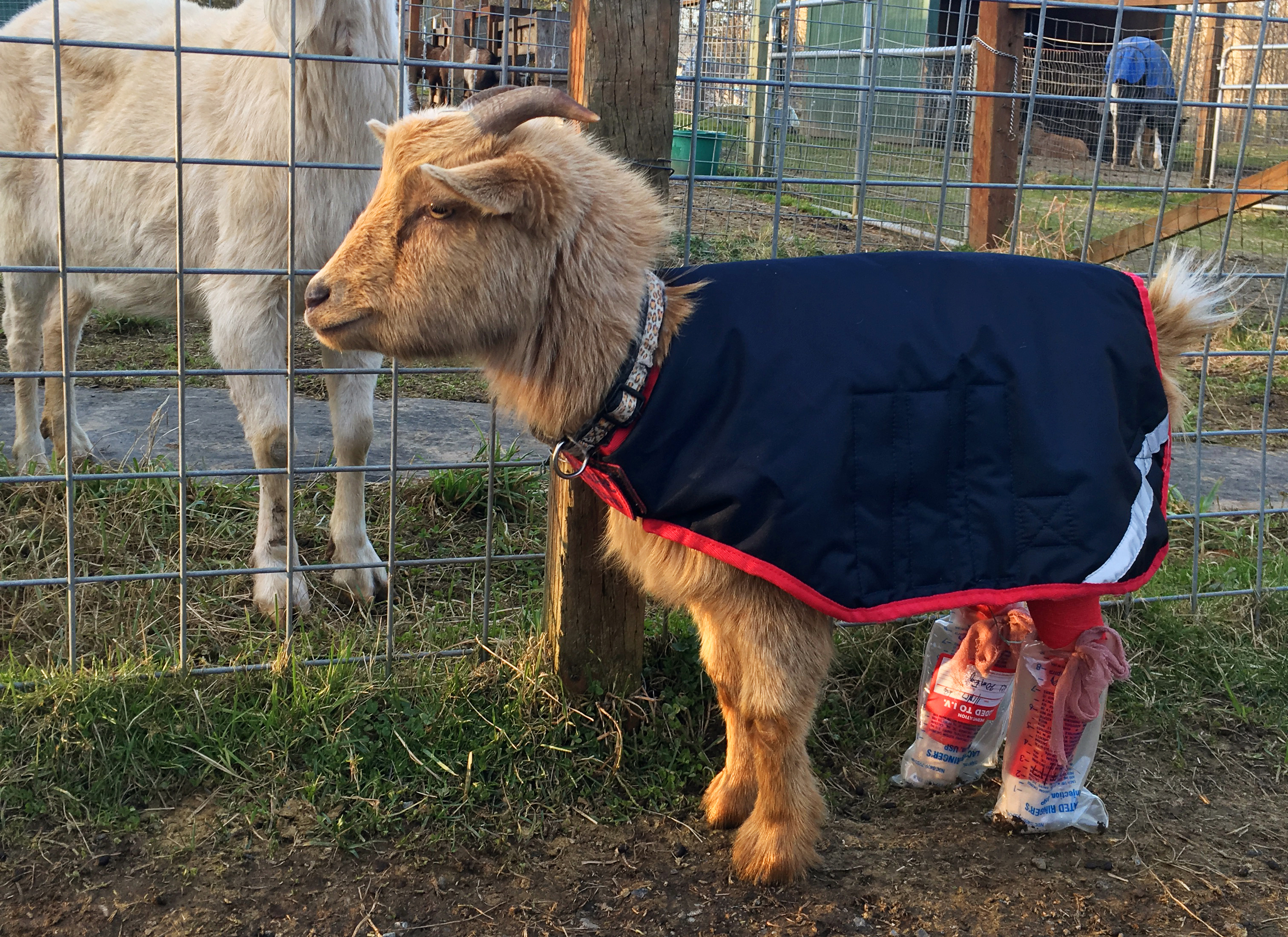 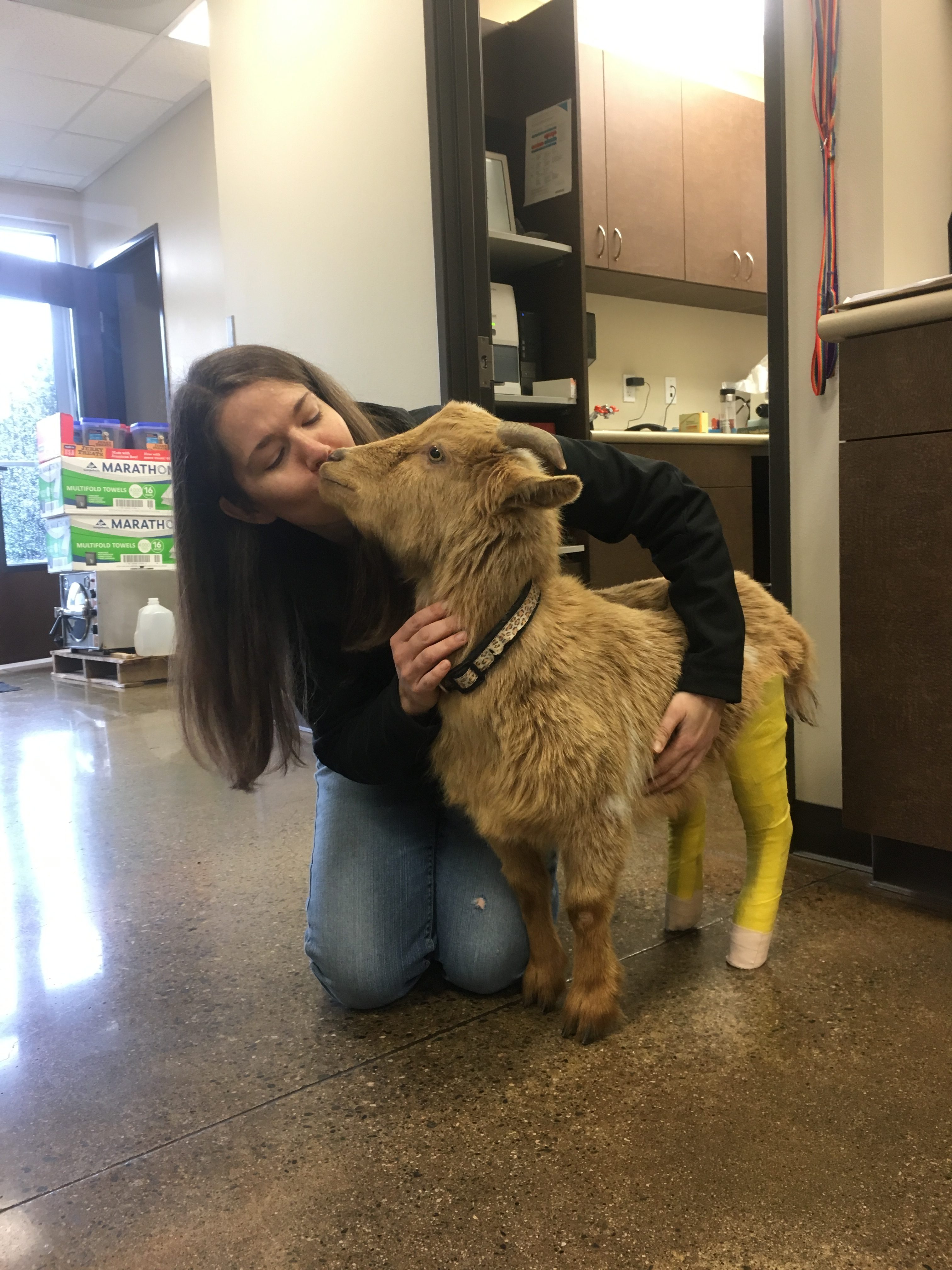 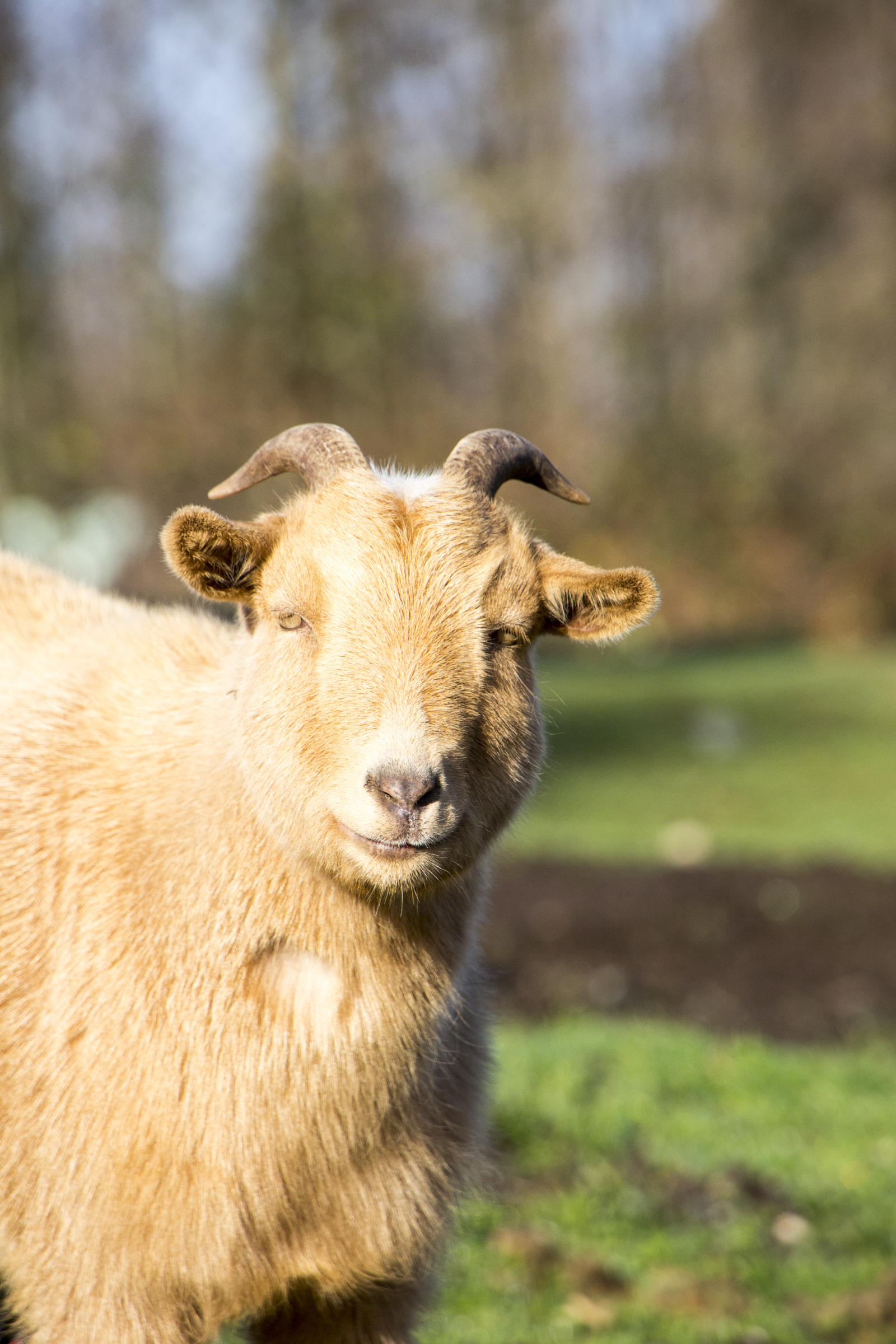 On March 1, 2018,  New Moon Farm took in six extremely emaciated, senior Saanen does, the survivors of horrific neglect.  After spending their lives being bred and milked as dairy goats, they were past their prime production years and had been abandoned to starve.   Despite being six of the sweetest, gentlest souls you could ever meet, they no longer had any value to their owner.

Sadly, one of the does did not make it.  Cleo was too far gone, and simply being transported to the rescue was too much for her.  She spent her last days being loved and pampered, probably for the first time in her life, and then our wonderful veterinarian Dr. Grant helped her pass.  The other five girls responded enthusiastically to love and proper care.  They were all treated for lice, internal parasites and had their very neglected hooves trimmed.  Tests showed that two of the does were pregnant, despite being well past appropriate breeding age, and in such horrible condition.  A careful re-feeding program brought them from a zero body condition score to normal – putting on an average of 54 pounds each in the first 3 months.

New names were in order, as they began their new lives, and New Moon Farm’s extended family named them.  Being surrounded by love and compassion and receiving proper care was working!  Each of the does began to show us their individual personalities.  They all shed out their awful, damaged coats and grew in soft, pretty, healthy ones.   And they started playing – chasing each other around the pasture, bouncing off the toys, rocking the teeter-totter.  They were clearly all feeling better, physically and emotionally.  Patricia gave birth to a healthy baby boy, and the pair hit the jackpot when they were adopted together.  Purple gave birth to two perfect babies, Paisley and Rain, who were also adopted by a wonderful family.

Now Purple, Lucy, Patience and Penelope are looking for their forever home.  Because they have a chronic disease called CL, and likely have another disease called CAEV, they will require more TLC and special care than most goats.  These ladies are all a part of our Greener Pastures program – their adoption fees will be waived to the right home.  They need a truly special home, with people who understand what CL and CAEV are, and what it takes to care for these special goats.   In return, their people will receive so much love, appreciation, and joy.  These does are just the kindest characters, with playful spirits, willing to forgive all they have endured to get to this point.

CL (Caseous Lymphadenitis) is a chronic bacterial infection that is not treatable with antibiotics or vaccines.  It is caused by a bacteria that the goat’s lymph system is able to filter to the outside of the animal’s body into an abscess (encapsulated pocket), thereby eliminating its ability to make the goat ill.  In most cases, the only symptom of CL is the formation of these abscesses.  The disease is passed to other goats only when they come into contact with material from a burst abscess.  This disease is transmitted ONLY through ingestion of the pus or by direct contact with the pus via an open wound. CL does not pass through colostrum, milk, or bodily fluids – passive transfer by just living in the same space is extremely rare.  If all goats in a herd are CL+, the disease can’t spread.  If the CL+ goats are kept separate from other goats, and owners take simple precautions,, it won’t spread.  The CL bacteria can live up to 8 months in the environment, so it is possible to “heal” a pasture after CL+ goats are on it.  After 8 months of being clear, healthy goats can use the space without risk of infection.

CAEV (Caprine arthritis encephalitis virus) is a chronic viral infection that can cause arthritis to develop rapidly around 5 or 6 years of age.  Much as with CL, many goats that have CAEV never show any clinical symptoms.  If they do develop symptoms, they are very manageable with inexpensive NSAIDs.  CAEV is only passed via milk, blood and semen, and so like CL, won’t spread to other goats via casual contact.

Caring for goats that are positive for CL and CAEV isn’t much different from any other goats.  There are two main approaches to living with CL+ goats. One option is that the owner will watch for new abscesses to form.  If a goat develops one, the owner can separate her from the herd, open and drain the abscess before it bursts, and return her to the herd when the wound s healed.  Or, an owner could have a living area just for the CL+ animals and allow the abscesses to develop and clear on their own.  The bacteria can live in the environment for up to 8 months, which means that the land is not “infected” forever.

Much like we have learned that FIV isn’t a death sentence for cats, many goats with CL and/or CAEV or live long, happy lives.  With proper management and care, it is not a risk to other goats.  We have seen many positive goats and negative goats live together in the same home for years without spreading the disease to the non-infected goats.  These goats and their babies all found wonderful, permanent homes with people who adore them. 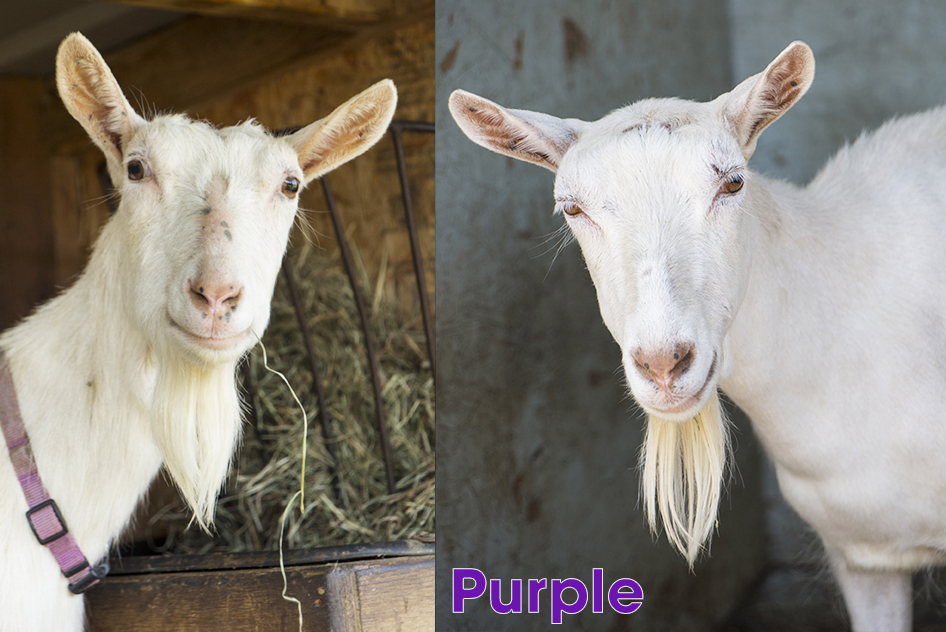 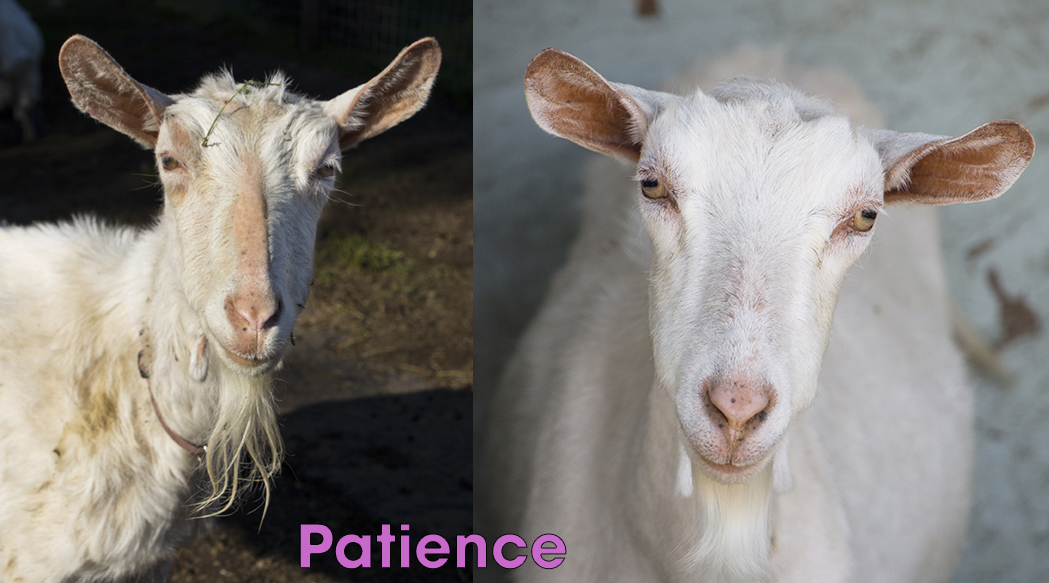 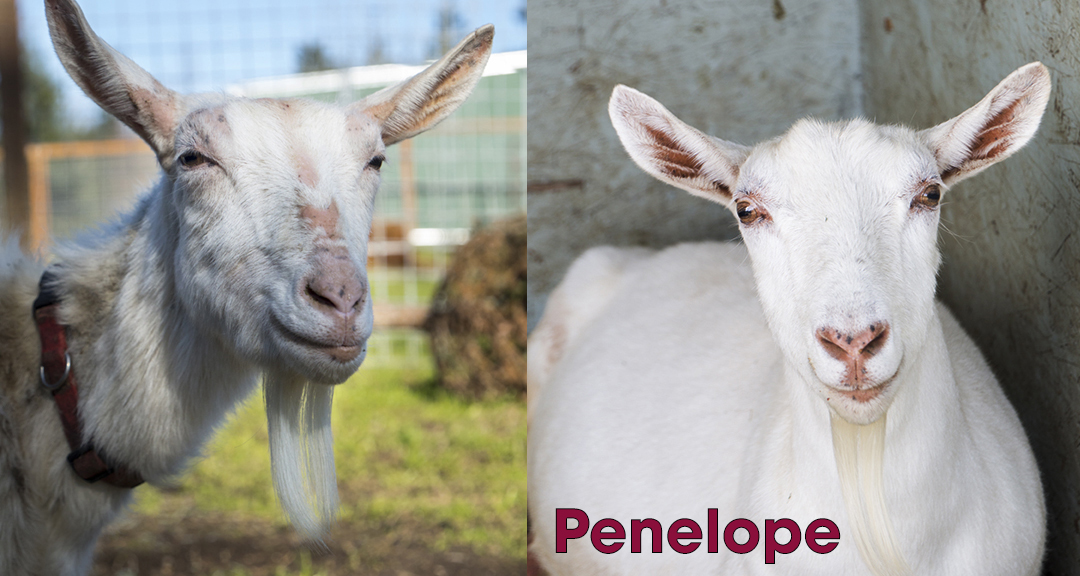